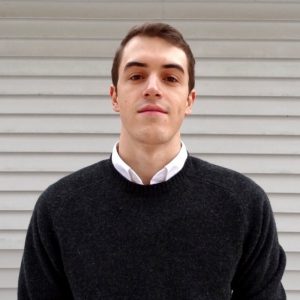 We’ll be releasing audio excerpts in a special Media Voices episode in August, as well as full transcripts from all the winners at a later date. For now, here are the edited highlights…

Reedsy as a company, its goal is basically to connect indie authors with the resources that a traditional publishing house would usually provide. There’s a tonne of self publishing websites and services and a lot of companies like that have podcasts. I basically pitched it as a branding exercise, but we wound up taking it in a very interesting and different direction.

Reedsy in general tries to differentiate itself from other services… they’re trying to put out these bold, polished products in every realm of self publishing, and the podcast, they wanted to just be part of that. Very quickly it became less about ‘let’s have this because everyone else has it’ and more about ‘let’s make something that actually stands out’.

There’s not a whole lot of podcasts in any genre that are just providing information for authors. Initially that’s kind of a direction we talked about; basically podcast versions of blog posts that take a concept and break it down to the absolute, nitty gritty.

Most of the podcast I’d listened to were NPR, Radiolab, these podcasts that take this very strong storytelling component while providing information, entertainment and value. That’s kind of the direction that I pushed for, and the direction that we wound up going in – actionable information in every episode, real world examples. But also this backbone of entertainment, and of telling these interesting stories. I think that was really the differentiating factor that brought the listeners back week after week.

It definitely would have been hard for me to get the podcast off the ground without the blog. Also, having come in as an intern, I didn’t have the most fleshed out understanding of the self publishing industry. Throughout the run of the podcast, that became a benefit because talking with these people, these great successful authors who I’ve had the pleasure to interview over these years, I was learning just as much as I was trying to help listeners learn.

I was able to come from just the right perspective in these conversations. I think that I filled that audience’s stand-in role as the host.

Most of the seasons have seven chapters, including the “prologue” and the “epilogue”. It was this fun framing technique that we came up with on the first season that, as the seasons went on, became a little more of a loose structure. We found that it’s not exactly the best way to work with season after season.

Basically, the idea was that this podcast was going to take an indie author, and over the course of a season, follow basically every step of their publishing process. We’re doing this very, very deep dive – when did (you get) the idea to become a writer, when did the idea of a book pop in your head, through chapters on writing, editing, design, publishing, branding process.

The way that we wound up going about recording them was usually in about three hour-long sessions. I did a fair amount of preparation. I sent a lot of questions to get their minds going about the topics that we were going to be talking about. But once we actually sat down to record, it was much more of a free flowing conversation. I was like, whatever you want to bring, whatever you think is useful from your experience to our listeners. That was my main goal.

One of the benefits of the edited type of episode that we chose, more of the NPR style versus just recording a conversation and putting it up, was that I was able to put together the narrative of the actual process after the fact. So we didn’t have to worry, during the conversation, about keeping a clear timeline. It was more about getting all of the helpful information from them.

That’s more true than ever in this last season, which I think benefited greatly from that approach. I pretty much did all the conversations before even starting to really write the episodes. I was able to pick up on thematic through lines…  and I think that that narrative really shows through in the final product.

It’s been a learning experience in just about every way. When I started the project I was an intern. I feel like not only has this been a transition into what it means to create a polished product, but also what it means to be part of a team.

And certainly again with this format, that allows you to really zero in on every single moment of the product that you’re putting forward. These are 20 minute episodes. They’re not just raw conversations that we turned into something. Every second I was zeroing in, making sure, does this minute hold value for the listener? Does this transition work seamlessly, does the music fit here?

From a weekly listener standpoint, and reviews on iTunes, the metrics are pointing positively, and certainly word of mouth feedback has been very positive. But it’s very difficult to measure how useful something like this is to a brand. You don’t have click through rates from listening to something on a podcast, right?

I think that Reedsy considers anything a success that expands the reach of people who their service could be helping.

I have a nice little home studio setup. It’s not like anything fancy for sure. I don’t have the walls treated, but I have a Kaotica Eyeball, which is like a mobile isolation booth. The recordings, I can pretty much get done anywhere. Sometimes I’ve done them outside.

The fun part of it for me is when it starts to feel like assembling a puzzle. You’ve got these narration sound bites that are going to be interspersed with clips from the interviews and I start bringing those in, and you chop those up, you know, more and more, until you just start to see how these things fit together.

You can look at something written down on a piece of paper with the narration all typed up and the timestamps where you’re going to pull from the interview, but until it’s that audio file and until you’ve got the clips moving together just how you want them, it’s really hard to see what the final product is going to be. And then finally, when it clicks together, you’re like, oh, there it is.

The interviews were mostly done over Skype. And those were definitely the hardest parts to maintain quality on. Sometimes people had the Blue Yeti mic already plugged in and they were ready to go and sometimes they were talking on their phone outside and you could hear the wind blowing on the microphone.

Certainly those were the trickiest part, probably from start to finish of doing the podcast for me, whether it’s knowing how to conduct them or knowing how to get the right quality. Fortunately, I think the guests and the content that they brought to the table more than made up for that.

Treating the vocals is huge in knowing what makes a polished audio product. It’s easy to hear something on the radio, and be like, well, that sounds good. And it’s easy to hear something that was recorded in your bedroom and be like, oh, that sounds bad. But knowing the difference, knowing the ins and outs of EQ and compression… I put a little bit of reverb on the vocals just to give them that NPR feeling of sitting in a room talking to somebody. Those touches really get the effect that I’d heard my entire childhood growing up.

I would say think about what you can do differently. From the start, I’ve done everything in my power to differentiate this from every other podcast that you’d be listening to. There’s plenty out there, and plenty of them are doing very cool things.

Entries for next year’s Publisher Podcast Awards will open in September. Think you’ve got what it takes to win an award? Sign up to our mailing list at www.publisherpodcastawards.com

This website uses cookies to improve your experience while you navigate through the website. Out of these, the cookies that are categorized as necessary are stored on your browser as they are essential for the working of basic functionalities of the website. We also use third-party cookies that help us analyze and understand how you use this website. These cookies will be stored in your browser only with your consent. You also have the option to opt-out of these cookies. But opting out of some of these cookies may affect your browsing experience.
Necessary Always Enabled
Necessary cookies are absolutely essential for the website to function properly. This category only includes cookies that ensures basic functionalities and security features of the website. These cookies do not store any personal information.
Non-necessary
Any cookies that may not be particularly necessary for the website to function and is used specifically to collect user personal data via analytics, ads, other embedded contents are termed as non-necessary cookies. It is mandatory to procure user consent prior to running these cookies on your website.
SAVE & ACCEPT
Hi there!